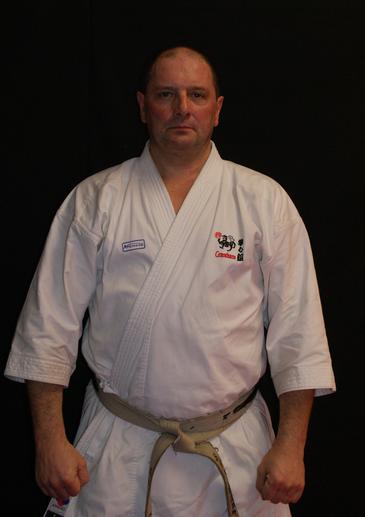 After being mugged by a couple of 'likely lads' in his home town of Middlesbrough, Geoff originally intended to take up Judo as a means of future self defence. However, arriving at the Budokan on the wrong night Geoff found himself enrolled in Wado Ryu Karate with Sensei Norman Wall who at that time was a 4th Dan. Having gained 5th Kyu the Club relocated to a different part of town, forcing Geoff to curtail his Karate training.

Geoff moved to Sheffield with his job, and started Shotokan training in 1985 with the KUGB under Sensei Paul Sharpe. After opting to start Karate training as a white belt again, Geoff gained Shodan with Sensei Eneoda in 1989 and Nidan in 1992.

Geoff moved to York in 1992 where he began training at York Kenshinkan with Sensei's Ian McLaren, Gordon Thompson and others, gaining Sandan at Sensei Eneoda's Crystal Palace course in 1997. Whilst living in York Geoff also studied Shodokan Aikido with Sensei Tish O'Brien, achieving Shodan in 1997

Geoff set up Grantham Shotokan Karate Club in 2000 under the English Shotokan Academy and graded to Yondan (4th Degree Black Belt with Sensei Dirk Heene in 2003.

Geoff Sensei graded to Godan in 2012 with Sensei Brian Seabright, Chairman of the BKA and re-graded with Shihan Masao Kagawa at the JKS European Championships in Copenhagen in 2014.

In August 2019 Geoff attended the 5th JKS International Cup in Dublin where he officiated in two days of international competition and was awarded 6th Dan by Masao Kagawa Shihan (9th Dan and Head of JKS Worldwide) following an intensive grading examination.

Neil started karate in 2004 at Grantham Shotokan, achieving Shodan in 2008 with the Japan Karate Do International (England) under Sensei's Williams, Barron and Dixon. He has been a dedicated student regularly attending both courses and competitions as part of his training.

Rob started training in the late 80's spending most of his time getting 'beaten up' by Sensei Gerry Breeze. Gaining 1st Kyu in 1989 with Sensei Kawasoe, however, decided to take some time off before attempting Shodan.

Rob returned to karate after more than 20 years "rest" in 2010 when he joined Grantham Shotokan Karate Club and finally fulfilled his ambition to be a black belt at Manchester in June 2011 with Sensei Brian Seabright of the BKA and other senior instructors. Rob passed his 2nd Dan with the JKS in Chester in 2014 at the annual residential course under a panel of senior JKS England instructors. In 2015 Rob visited Japan and successfully completed 'Kangeiko' (Special Winter Training) at the JKS Honbu Dojo Tokyo. He travelled to Japan again in November to 2017 to attend the JKS International Seminar with other Instructors from around the World and successfully passed his 3rd Dan under the watchful eyes of the JKS Japan Honbu Senior Instructors. In June 2021, under the scrutiny of Alan Campbell Sensei, Rob furthered his dedication to karate by achieving Yondan (4th Dan).